When I know what I must change in myself I keep my focus on it. When I accept that I am solely responsible for making this change, I resolve to do so. Focus and resolve lead to effort. Of course, there are two ways to make effort: I try harder or I try differently.

Usually we try harder before we try differently. A man pushing a large stone into place in his garden will cease trying harder when he gets to a rise. Trying harder to push will not work uphill as well as trying differently. Wedges to hold the stone in place and a lever will get the job done.

A man raises his voice, louder and louder, to get his idea across to his wife. Trying harder like this alienates his wife and she closes to him. Trying differently, for example, he decides to value her idea first. Or, perhaps, he asks to hold her hand and sit down quietly with her. He asks for her company while he calms down. He tries to find the experience that has adrenalized him. He shares himself more, rather than force the idea on her. Now that she feels connected to her husband, the woman is able to value his idea. Now that he has calmed down, the man realizes the sense of connection was what he was looking for with his wife. Her agreement with his idea might become secondary, or not even matter at all anymore. A different kind of effort often leads to new learning.

Sometimes trying harder works. A man uses every bit of his will power to not interrupt his wife, a habit he is committed to changing. Will power often does work, but it has limitations. If the stakes are high enough in an argument his will power might not be enough.

If the man tries differently he his liable to learn new things that will really change the habit rather than overpower it. If he pays attention to the feelings that motivate him to interrupt, he may get a better handle on himself and the situation. He might slow down and soften inside and feel truly receptive to his wife. He might lose all urgency to get his idea across to her in the midst of her revealing her thinking to him.

Couple therapy has a unique ability to help you try differently to make the changes you want to make. 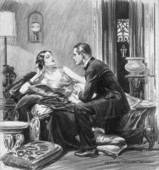 “Do you really want me to read these articles about emotion and couple relationships with you?”

“Well, I would like that. They are short, and maybe reading together will help us. But we could start with the film clips about couple relationships.”

“Are you going to want to go to marriage counseling?”

“Yes, I think so. But maybe we can decide together.”